Ready to buy or sell a home? Contact Us. 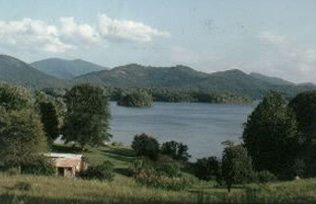 Tucked away in the northeast corner of Georgia and the western edges of North Carolina is an area of natural beauty and heritage of Appalachia. Lush forests, cool lakes and rushing water roars.

Towns County was formed in Georgia in 1856 from parts of Union and Rabun Counties. It was named for George Washington Bonaparte Towns, governor of Georgia from 1847 to 1851. Two thirds of Towns County lies within the U.S. National Forest.

Hiawassee is a Cherokee word meaning “meadow”. Lake Chatuge is located in the northern part of the county and reaches into North Carolina. It is a storage facility for the Tennessee Valley Authority and is also a public preserve.

Lake Chatuge is a 7,500-acre man-made reservoir that was created in 1942 after the Tennessee Valley Authority built the Chatuge Dam to create a system of flood control and provide usable hydroelectric power. The Chatuge Dam allowed the area to fill naturally and created Lake Chatuge’s numerous peninsulas and private coves with magnificent locations for swimming, boating, and other water sports. The unsurpassed beauty of the lake created by the dam inspired people to name North Georgia’s valley that contains Lake Chatuge The Enchanted Valley.

The entire region surrounding Lake Chatuge is famous for year-round trout fishing in numerous streams and rivers. The lake itself is loaded with bass. The area hosts several bass fishing tournaments and was proud to host the 2018 BassMaster Classic which is the Super Bowl of bass fishing. Fishing licenses are required. A great way to have fun exploring Lake Chatuge is to enjoy a leisurely cruise on a pontoon boat. Pontoon boats and other recreational boats can be rented at various marinas on Lake Chatuge.

A combination of service to our community and our agents’ experience level makes us the obvious choice in the Mountains. Contact us today!

Fill out my online form.